What is the Vaporwave
Aesthetic (With Examples)?

Vaporwave originated as a branch of electronic music and gained popularity on the internet in the early 2010s. Musically, vaporwave is composed of samples of lounge and popular songs from the 80s and 90s.

Since its foundation, vaporwave has transcended music to become a visual movement inspired by artwork from the same period.

You can also spot the use of vaporwave components throughout the music video for Ed Sheeran's hit song "Cross Me." And when Drake transported back to the old days with “Hotline Bling,” he relied on vaporwave visuals to deliver his message.

Dress to Impress With Vaporwave

Fashion brands have taken notice of vaporwave and hopped on the trend as seen in many products. Nike released a vaporwave collection, including the Men’s Zoom Streak Spectrum Plus shoes and Nike Vaporwave Woven Half Zip jacket.

While the core elements of vaporwave are the same, some artists and creators have their own interpretation of it. For instance, many perceive vaporwave as the future that never happened.

Generally, vaporwave is used to turn back the clock for a dose of nostalgia. Such is the case for creator Lucien Hughes, who incorporated vaporwave aesthetic and music in memorable moments from The Simpsons. The trend became known as Simpsonwave after gaining a lot of popularity on social media platforms like YouTube and Tumblr.

A Dose of Vaporwave in Marketing

Vaporwave has been a driving force behind many advertising campaigns in the past few years. In 2017, Spotify created a series known as “RapCaviar Pantheon” in which they honored the breakthrough artists of the year. The designs featured each artist in a 3D life-sized sculpture that takes inspiration from the vaporwave movement. 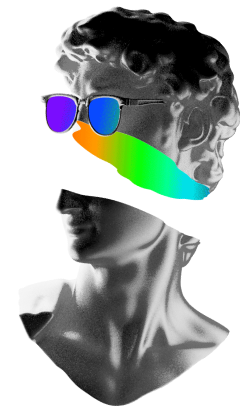 Welcome to a Metaverse of Vaporwave

More recently, vaporwave is trending again due to the rise of the metaverse and NFT world. Given its futuristic yet retro aesthetic, vaporwave is a suitable style to use for Web3 platforms, as many artists have created collections featuring vaporwave color schemes and elements.

Get Creative With Vaporwave

Whether you're looking to create a video, graphic, or animation, vaporwave can add a blend of vintage and modern touch to your work. Vaporwave is a versatile design style that can be applied in a variety of ways to any genre: music, gaming, art, sports, films, marketing, fashion, and more.

Are you wondering how to make vaporwave art? To inspire your next project, we’ve rounded up a collection of creative elements based on the vaporwave trend. Explore through effect packs, filters, visual effects, transitions, and more components to evoke nostalgia in your work.